Mental illness can affect anyone, no matter their status, gender, age or race. These mental health role models are celebrities who have struggled with mental illness, but are not letting it hold them back. Instead, they are using their platforms to help end stigma and encourage others to seek the help they need. 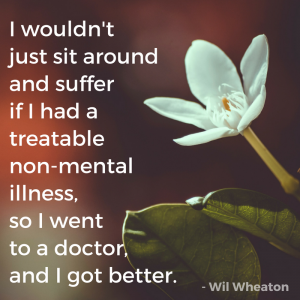 Dwayne Johnson is known as "The Rock," but even he has struggled with mental illness. He recently opened up about his battle with depression following his mother's suicide attempt when he was only 15 years old and subsequent bouts of depression throughout his life.

I reached a point where I didn't want to do a thing or go anywhere. I was crying constantly.

Dwayne is speaking publicly about his experiences to let others know that they are not alone.

"We've always got to do our best to pay attention when other people are in pain," he said. "We have to help them through it and remind them they are not alone."

Watch Dwayne talk about how he turned a bout of depression into a career defining moment.

Lady Gaga's struggle with Post-Traumatic Stress Disorder and chronic pain, combined with her desire to create a kinder and braver world, led to the creation of Born This Way Foundation, which exists to support the wellness of young people. Her foundation partners with the National Council for Behavioral Health to provide Mental Health First Aid classes that coincide with her tour dates and locations.

Traditionally, many associate PTSD as a condition faced by brave men and women that serve countries all over the world. While this is true, I seek to raise awareness that this mental illness affects all kinds of people, including our youth. ... No one’s invisible pain should go unnoticed.

Born This Way Foundation also offers a list of hotlines and resources for topics such as Drug & Alcohol Issues, LGBT + Questioning, Grief Management and more.

Sign up now for a Mental Health First Aid training in Franklin County.

This Supernatural and Gilmore Girls star may look completely comfortable while acting, but he has been very public about his mental illnesses: anxiety and depression.

Jared launched his first t-shirt campaign in 2015 urging anyone struggling with depression to "Always Keep Fighting." Subsequent t-shirt campaigns have also included the phrases "I Am Enough" and "Love Yourself First."

"I knew that I wanted to work with a charity (or charities) that dealt with the specific issues of mental illness, depression, addiction, and suicidal thoughts," he explained.

Mental illness snuck up on Jared when he least expected it:

It kind of hit me like a sack of bricks. I mean, I was 25 years old. I had my own TV show. I had dogs that I loved and tons of friends and I was getting adoration from fans and I was happy with my work, but I couldn’t figure out what it was; it doesn’t always make sense is my point. It’s not just people who can’t find a job, or can’t fit in in society that struggle with depression sometimes.

Jared wants his fans to know that "there's no shame in having to fight every day."

Along with her struggles with eating disorders and addiction, Demi has been diagnosed as Bipolar and experiences mood swings from depression to mania. Her foundation, Be Vocal, aims to break the stigma and show people what living with mental illness really looks like.

I stand here today as proof that you can live a normal and empowered life with mental illness.

Watch the Be Vocal Documentary to learn about three people who live with mental illness and speak up for mental health.

Rapper Kendrick Lamar is using his lyrics to express the thoughts and feelings that come with depression as well as promoting a drug-free lifestyle. His song "Swimming Pools (Drank)" describes the downward spiral of alcoholism and addiction.

I ain’t a drinker I’m a thinker, call it what you want.

Kendrick has been dubbed a “Generational Icon” for his artistic, charitable, and community efforts. The rapper was invited onto the California Senate floor to speak in recognition of his work to improve the Compton area where he grew up.

Find Your Words re-purposed some of Kendrick’s lyrics in a commercial encouraging people to discuss depression in order to break the stigma.

I was not really aware that I had it [postpartum depression]. It was devastating to my whole family. I had gone through numerous attempts to have a baby and when I did finally have this perfect, beautiful, healthy baby and it all but destroyed me. I couldn’t hold the baby, I couldn’t do anything for the baby, I couldn’t look at the baby. Every time I got near her, even the smell of the diapers of the baby. I would… My knees would get weak. I would… I just cried all day long and I thought I’d made the worst mistake of my life...

Brooke remembered, "I had no desire to even pretend to care about her. And it absolutely terrified me." Eventually, friends suggested that she may be suffering from postpartum depression and, with some persuasion from her husband, she decided to try prescribed antidepressants. With time, she desired to be around her baby a little more. Brooke is sharing her story so that other mothers won't ignore the symptoms of postpartum depression out of embarrassment or shame.

"It has nothing to do with your love for [your children]," she explained. "It is something that is in your body, the loss of estrogen, the amount of hormones. … Pay attention to the feelings that you're feeling and talk about it and ask your doctor. … Find out what medicine's available. You don't have to be miserable."

Read more of Brooke's story in her book: Down Came the Rain: My Journey Through Postpartum Depression

"When I was around twelve or thirteen, my anxiety began to express itself in all sorts of delightful ways," Wil divulged. "I worried about everything. I was tired all the time, and irritable most of the time. I had no confidence and terrible self-esteem. I felt like I couldn’t trust anyone who wanted to be close to me, because I was convinced that I was stupid and worthless and the only reason anyone would want to be my friend was to take advantage of my fame."

Wil did not realize then that he was experiencing mental illness.

Mental Illness was something my family didn’t talk about, and when they did, they talked about it like it was something that happened to someone else, and that it was something they should be ashamed of, because it was a result of something they did. This prejudice existed in my family in spite of the ample incidence of mental illness that ran rampant through my DNA, featuring successful and unsuccessful suicide attempts by my relations, more than one case of bipolar disorder, clinical depression everywhere, and, because of self-medication, so much alcoholism, it was actually notable when someone didn’t have a drinking problem.

Read more of Wil's speech about his experience with anxiety and depression.

Wil also writes about his journey with mental illness on his website. One of our favorite quotes from Wil: "I wouldn't just sit around and suffer if I had a treatable non-mental illness, so I went to a doctor, and I got better."