Christa Brickey: Dealing with the After Effects of Suicide - ADAMH Skip to content

Christa Brickey: Dealing with The After Effects of Suicide 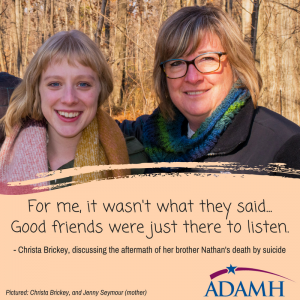 Christa Brickey knew from a young age that her older brother Nathan was struggling.

Nathan suffered from medical issues that caused him to endure surgeries, feel constantly uncomfortable, miss school and get held back a grade. Christa and Nathan had been close. She even considered him to be her best friend. Things started to change, though, when Christa was old enough to go to school and Nathan, only 7 years old, was officially diagnosed with depression.

“He didn’t feel like he belonged here,” Christa said of her brother who was three years older. “Anyone who looked at him could tell that he wasn’t happy.”

All of this made it hard for Christa to connect with him. Through the years, she started to view Nathan as a bully and they eventually grew distant.

After high school, Nathan began drinking and Christa remembers multiple times when he was arrested for driving under the influence. On another occasion, he was found drunk on top of a parking garage and was arrested, spending a month in jail. He spent some time in a group home, but was eventually kicked out. Christa also recalls a time when she and her parents were out of the state and Nathan took too much caffeine powder and was hospitalized. Visiting Nathan in the hospital would be the last time Christa would get to see her older brother.

“It’s really a blur,” Christa said, staring into the distance as she recalled the events that happened next.

Christa’s parents came home one day to find that Nathan had died by suicide.

“I was angry, but I could also sympathize,” she explained. Christa was shocked, but thought back on Nathan’s life that had been full of depression and difficult situations. She didn’t struggle with the question of why, as so many survivors of suicide do. Even though she had grown up in the same loving family as Nathan, she could see that his situation and outlook on life were vastly different than her own.

Christa says she gave herself time, but found solace in doing what she usually did: going to school, spending time with friends, going to the gym, attending Bible study, and spending time outside rock climbing. She feels lucky that she had a group of friends close to her age that she felt comfortable enough to talk with about what she was going through.

Many people struggle to find the right words to say when someone has lost a loved one to suicide. What were the most helpful things that people said to Christa after she experienced this loss?

“For me, it wasn’t what they said,” she responded. “Good friends were just there to listen.”

Christa felt comfort when friends just sat with her in companionable silence and asked questions like, “What is hardest for you right now?” and “How can I help you?” One thing she says was not helpful was when people tried to offer advice, not really understanding her situation. Her plea to individuals who know someone grieving: Be patient.

Christa misses her brother, especially as she enters new life stages. She felt her older brother’s absence on her wedding day in July, 2016 and she misses him as she realizes that this is the first year that she is older than her brother was the last time she got to see him. Grieving Nathan’s death is a different process for her than she sees other people experiencing after the loss of a loved one.

“Most people try to do something that the person they lost loved, like making their favorite food or going to their favorite place,” she noted, “but my brother [growing up with depression] didn’t really like anything.”

As she processed the traumatic experience of losing her brother, the most difficult thing for her was seeing her mother’s reaction. Christa’s mother, Jenny Seymour, connected with Franklin County LOSS (Local Outreach to Suicide Survivors) first and invited Christa to join her a year later at an event to honor and recognize loved ones lost to suicide. This was when Christa realized that there was a way she could help other people experiencing loss due to suicide.

A kind and calm police officer had offered support for Christa and her family after Nathan’s death. Now Christa and her mother volunteer with LOSS to provide that support and comfort to others experiencing loss. Even though she admits that conversations with other suicide survivors can be emotionally draining at times, she says that it is all worth it in the end because “LOSS is a good community of people who can relate.”

Christa was already studying social work at The Ohio State University before Nathan took his own life, but she found renewed passion for her studies because of this tragedy. She has found new ways to connect with people who are grieving and has discovered that suicide is, unfortunately, not that uncommon. She now has more compassion and empathy for those experiencing other forms of loss and understands that she cannot fix their situation, but she can be there for them like her friends were there for her.

Since connecting with LOSS, Christa has helped a clinical counselor lead a support group meeting for teen girls who have lost someone to suicide. During this meeting, the girls participated in writing and drawing exercises and talked about their emotions after experiencing the trauma of losing someone to suicide. Even though it was difficult for some of the girls to open up, Christa noted that “just being in a room with people who share your experiences can be comforting.” She expressed that this group setting allowed them to realize that they were not “abnormal” or “crazy” for feeling a certain way.

“It was shocking to me how many people have said that they don’t talk to anyone outside of their family [about their loss],” Christa realized. Being a LOSS volunteer has allowed her to work on changing that.

Christa is now a part of the Companion Program at LOSS, where she meets with two other women close to her age who have lost a loved one to suicide. This program also provided her with grief training on how to effectively help others in her situation. Now, Christa feels more confident going up to grieving people and offering to talk. After she has completed her Master’s in Social Work, she hopes to put her degree to work in an area where she can continue to help others who are grieving.

The one thing that Christa cannot stress enough: “Always take people seriously when they tell you that they are considering suicide.”

Franklin County LOSS is part of the ADAMH Network of Care. To find resources for survivors of suicide or to volunteer, visit: www.franklincountyloss.org

LOSS envisions a community of suicide loss survivors who are experiencing a restoration of hope and standing together for suicide awareness – a Community of Hope. They will be hosting an information session on Saturday, May 19, where you will have the opportunity to learn more about their programs and volunteer opportunities.

Volunteer opportunities at LOSS include:

Register for this information session at: http://franklincountyloss.org/events/loss-volunteer-information-session/

Visit our Suicide Prevention page for a list of resources, warning signs, and how to help a friend in need.